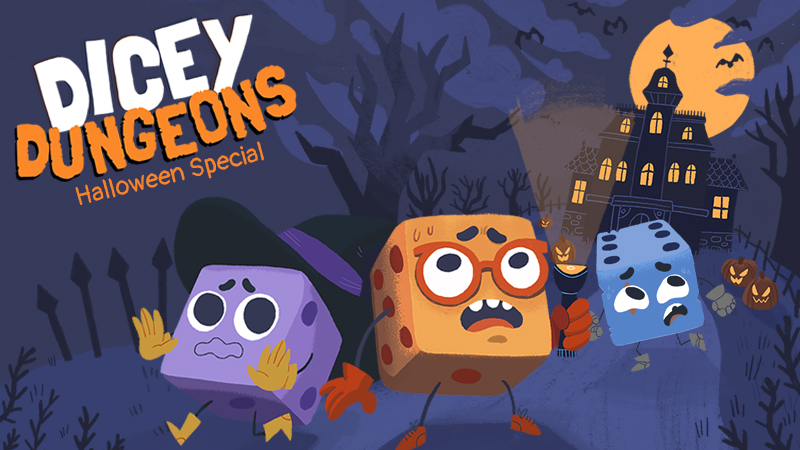 Welcome to Dicey Dungeons Version 1.6 - the Dicey Dungeons Halloween Special! For ONE WEEK ONLY, join us for three special episodes in a series of dungeons which aren't just dicey, but are also downright sinister.

This one-week-only update well be playable until 4 November, featuring:
* Three new enemies - brought out of the halloween cupboard for just this week!
* New spooky music!
* New backgrounds!
* Halloween costumes for some of your favourite and/or most hated enemies!
* And three totally new episodes!

Each of these episodes - for the Warrior, the Inventor and the Witch - makes a significant change to the basici game.

* First up, a straightforward Warrior episode for our straightforward Warrior! The episode is basically a bonus round with new Halloween-only twists on the rules as you descend into the dungeon.
* The Inventor episode is - well, like the other Inventor episodes, but with much, much worse equipment. WAY worse. Just all-round extremely terrible equipment.
* The Witch episode sets up a series of six puzzles with set spells and dice where you have to beat each enemy in just one turn.

All of this is for ONE WEEK ONLY - just pick the Halloween Special from the title screen to play the special episodes!

*IF YOU'RE NEW TO DICEY DUNGEONS*

If you haven't played Dicey Dungeons before, you should probably play the standard game for a little while first. It's a good idea to get used to the characters and the rules of the game before you launch into the HALLOWEEN SPECIAL, where the episodes are not just extremely spooky but also... kinda challenging.

Well, kind-of! The Halloween Special is made almost completely with the Dicey Dungeons modding system, and that means that once Halloween is over, you'll be able to use it like you would any other mod. We'll be explaining more about mod support, how to enable mods and how to make your own in the next update.

Running on Linux, game is crashing when I try loading the Halloween mod (either by clicking 'Restart' or by going to the mods menu and loading it there).

It's also crashed once now that I'm loading a non-halloween save game ... where should I send the crash log?

Fantastic bonus!  Now I can stop worrying about getting  the  64 Heart challenge grinded out.  Happy  Harvest!